Some of the most talented performers in the world call Branson home. There's no exception when it comes to sibling musical group SIX. These real-life brothers have been dazzling Branson audiences with their incredible talent for a cappella performance since 2006.[1] When you go to a SIX show, you'll be treated to classic songs you know in a way you've never heard them before.

As a cappella artists, they perform without the help of instruments or live musicians. Instead, you hear only the singers' voices and the melodies they create. When you hear SIX, you'll swear that you can hear musical instruments, though. That's because the Knudsen brothers use their voices to create rhythms and dynamics that go beyond what you hear from your everyday beatbox artist. From drums to horns, they can do it all.

Their beatboxing skills are truly impressive, but that's not all there is to enjoy at a SIX show. The brothers do plenty of dancing and get laughs from the audience, too. The combination of humor, choreography, and incredible singing has made this one of the favorite acts in Branson. In fact, the group has been recognized at a variety of Branson awards shows since its debut.[2] If you've never experienced a cappella show before, SIX is the perfect place to start.

SIX focuses on offering a clean, family friendly show that anyone can enjoy.[3] Great costumes and incredible stage lighting help make this everything you hope a Branson show will be. Consummate musicians, these talented brothers truly love their audiences and perform at the highest caliber night after night. If you're going to see just one show in Branson, SIX deserves to be high on your list of picks.

Is SIX the Only A Cappella Show in Branson, MO?

As of 2021, SIX is the only fully a cappella show in Branson. While other performers in Branson do individual songs without accompaniment by instruments on occasion, no one else hosts a totally instrument-free show.

When does SIX play in Branson?

The group plays from Monday through Saturday throughout the year in Branson. It's essential to check for tickets before booking travel, as the group takes select dates off during the year to tour.

Who Are the Members of the Musical Group SIX?

The group is made up of six out of 10 Knudsen brothers. The brothers are:

The four younger Knudsen brothers work behind the scenes at the show.

Where Is the SIX Show Held?

The SIX show is held at Dick Clark's American Bandstand Theater in Branson, MO. Located on famed Highway 76, the theater is one of the premier venues in Branson. Be sure to arrive early so you can browse the theater's extensive collection of music memorabilia. SIX started performing at Dick Clark's American Bandstand Theater in 2020. If you have seen them in Branson before, be aware that this is a different venue from the one where they performed before. 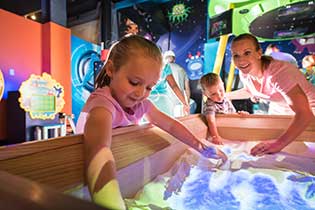 Regular Seating is rows 7 on back.

Special Veteran Rate is for the Veteran and Spouse.

Regular Seating is rows 7 on back.

Special Veteran Rate is for the Veteran and Spouse.